“In preparing for battle I have always found that plans are useless, but planning is indispensable.”
― Dwight D. Eisenhower

Last week, I wasn't able to do a hike because I was taking a beginning blacksmithing class.  It was a great weekend of learning something new, and swinging a hammer so many times my shoulder felt like it was going to fall out of it's socket.  I got my arm workout in for sure.  Then it started snowing all week.  Off and on all week there was snow and I was beginning to think I wouldn't be able to hike for another weekend.  Midweek, the weather report said there would be a hiatus to the flurries on Saturday so I decided I'd go for it. 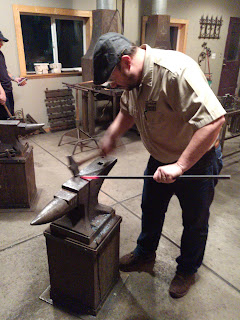 Well, I had a good plan.  It was a doable plan, and it was a plan that took into account the weather we had this week.  I was going to do the Boulder creek path.  It was in my book of hikes, even though it was more of a walk through town than an actual mountain hike.  The distance was about 7 Miles if I took it from one end to the other, but it was downhill most of the way, so I knew it was within my capabilities.  I got the girls up bright and early and we hit the road.  We took two cars so we could leave one at one end of the hike and then shuttle back up afterwards.  We were good to go. 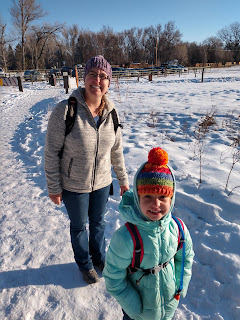 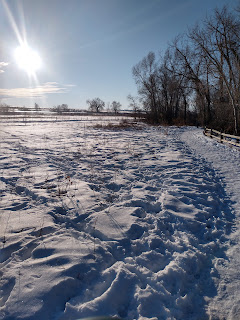 Well, almost good to go.  I was smart and filled up my Camelbak pack with water and brought food for a longer trip and got everything good to go.  My wife followed me to our designated parking area at the end of the hike, and I moved everything off the seat for her only to realize that I had cross-threaded the lid on the water bladder and the front seat was soaking wet.  The pack was wet, and everything in it was dripping.  If I put this thing on in the 24 Degree temperatures, it would freeze on my back and be a terrible morning.  My mood was not great finding this out.  My ladies piled in the back of the van, and like an Uber Driver I was ready to go.  I'd be okay I thought just tucking a granola bar in my pocket, and I had a small water bottle I could carry instead of using my pack today.  No problem.  We weren't exactly exploring an undiscovered frontier on this trip, so I was ready to hit the trail. 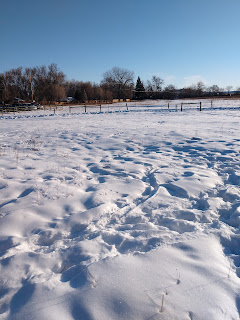 There was a massive amount of construction going on in the Boulder Canyon, and half the trail was blocked off.  There were sections that the trail was actually being used as the roadway, and other areas that were completely missing with heavy equipment.  My visions of starting in the hills outside of town and then leisurely strolling through Boulder were pushed aside like a rockslide by an excavator.  Time to regroup.  I was super grumpy now at this point, as the sun was already up and I had no backup plan for hiking.  There were only so many trails I felt comfortable with hiking without micro spikes or any other extra grip, so I waited until we got out of the canyon and had internet again to find another trail.  I also left my trail book at home, so I had a vague idea of trails that were in the book, but no specifics.

My better half mentioned the Bobolink trail and I remembered that being in my book so we headed out to the flatlands east of boulder to walk a nice easy trail.  We got there without any issue and I found the worst ice of the entire day immediately outside the door to my van. I did my poor impression of Tara Lipinski and landed my triple loop and it was time to go. 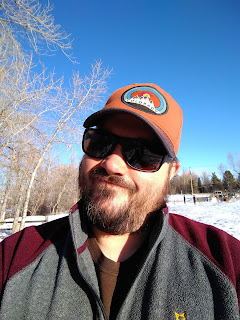 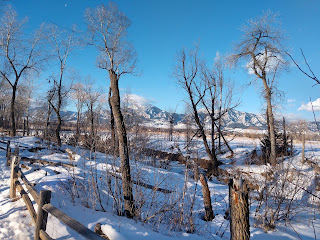 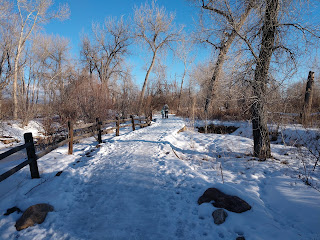 This was a really nice little trail if not a little boring.  It would probably be even prettier in the fall.  We started with a little loop off the side of the paved trail that ran along the Boulder Creek.  It was really cool with the frozen ice and still hearing the water bubbling underneath.  The path was packed down and a little icy, but was very managable for everyone.  I think we only had one minor slip from my daughter. 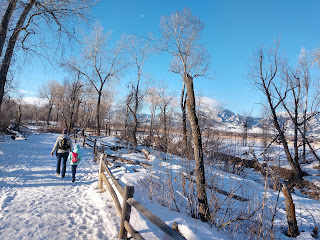 The creekside little path came back to a plowed and level concrete multi-use trail that took us over by the East Boulder Rec center and around a series of little lakes.  There were geese sitting on top of the ice and a dog park on the far end that we got to see some puppies playing. 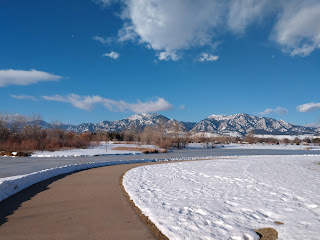 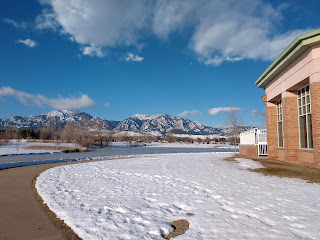 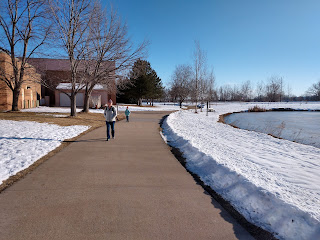 We had some interesting encounters with other people out and about as well.  One runner was stopped and picking up pieces of broken glass on the path.  It looked as if someone had thrown something out of their car and it shattered on the concrete.  If I had my pack with me I would've had a trash bag to give her o she wouldn't have to carry glass in her hand, but we know how that went down.  I will never understand people who litter.. I've been behind a car and seen someone just throw an entire McDonald's bag out the window.  It's disgusting. 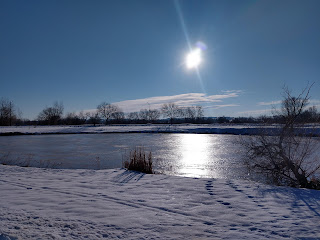 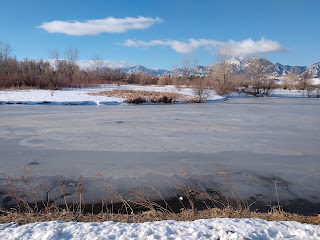 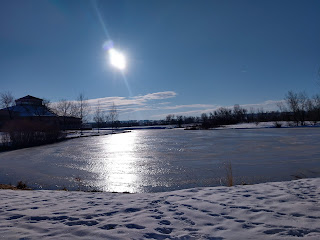 We also saw in the distance a group of about 8 people in full military fatigues and packs jogging down the trail towards us.  We got closer and deduced that it was Physical training for ROTC group, but it's always a little disconcerting to see people in that manner of attire running the opposite way you're going.  If movies have taught me anything, I was looking to the horizon for the nearest Kaiju or Godzilla type monster 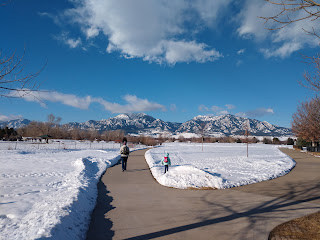 Having narrowly escaped a Michael Bay movie plotline, we continued the hike around a field and over a couple canals.  There was nothing too spectacular or interesting to report except a whole bunch of birds were singing and calling.  We even heard a woodpecker in the distance.

We made a game of kicking snowballs down the path to keep the 7 year old occupied and focused, and got back to the car.  Mission accomplished, and I got to check off what I assumed was a more filler hike anyways.  Not exactly what I had planned, but it still turned out to be a nice jaunt. 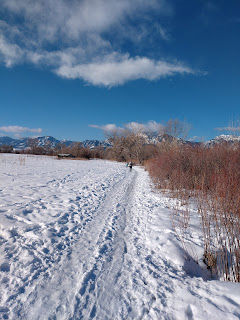 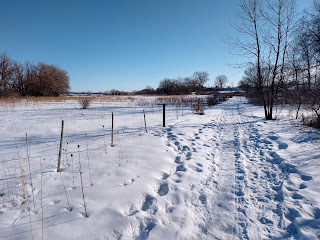 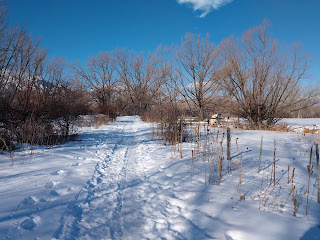 No matter how grumpy the previous setbacks made me, getting outside and walking around clears all that up.  I had almost entirely forgotten any minor inconvenience that the day started with. 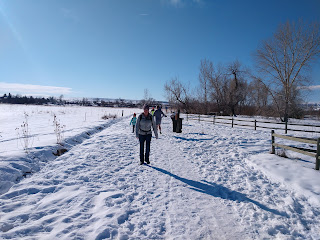 After the hike we went to REI and got some new toys that I'll talk about in a future post, and got some tacos. Not a bad Saturday morning in Boulder, Colorado.

Tomorrow, I'm going on a high altitude Snow Shoeing trek with my Marine Brother-In-Law, so assuming I don't get killed in an avalanche or eaten by a Yeti, I'll give a report of my Mountain Adventure soon.
Posted by Brian at 5:20 PM