After I posted pics and announced my hike last week a bunch of people said they'd like to join if I went again.  The solitude of the first trek was needed as a starting point, but company and support is welcome for excursions as well, so I decided to let people know the next trip and leave it to them to meet me or not.  If no one else showed up, I'd go on my own, but if anyone else was truly crazy enough to get up at the buttcrack of dawn, I'd welcome them. 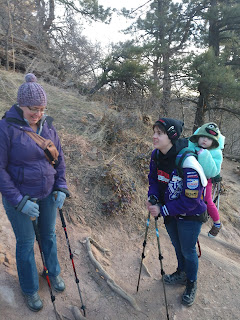 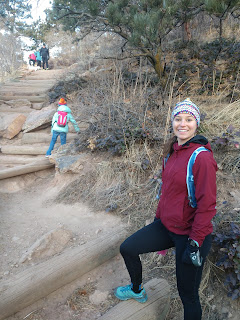 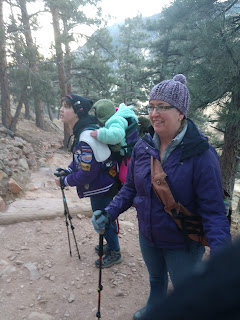 I went onto Facebook on Thursday and Announced a time and place for the hike.  I was looking through my book and selected the Mt. Sanitas Hike.  I'd heard of this one, and knew that the distance wasn't too long, but it was more vertical than my last hike.  Maybe it was the act that other people might be coming and i didn't want them to think I was wussing out, or Maybe it was my inability to read the pages in the book, but this trail would end up being more formidable than I planned.  The good news is that I made it through; the bad news is that no one might want to join me again.

Lesson: Trust when the guidebooks tell you a trail is moderate, not easy.

If you've ever been to a Thai restaurant, you now better than to ask for anything spicy.  The level of heat is insane if you say you like spicy food. Ask for medium spice and you'll be chugging down water, and loving the pain.  I think Trail guides are written at the same hyperbolic rating system.  It was labeled as moderate, and a 3.1 mile hike.  The summit is in the 6,000 foot range, so you wouldn't think it'd be too bad.   Had I taken the time to actually read the entry I'd find that they describe the ascent as steeper than some 14ers, and strenuous.  Now I have a better idea of what the author's definition of "moderate" is.

I woke up and was pleasantly surprised that my wife and daughter were planning on going with me.  They weren't even THAT grumpy considering how early I made them wake up.  We got ready for the hike and I got ready to break in a new pair of hiking boots that had previously been languishing in the closet and wass mart enough this time to eat a couple pieces of toast and some apple juice.  See, I learn from previous experiences.

We loaded up the car and hit the road.  It was warmer this time, and the drive to Boulder was absolutely gorgeous.  The clouds were orange as the sun came over the horizon, and the mountain ranges lit up.  I was able to identify the peak we'd be climbing and pointed it out to my daughter.  She seemed excited to get to go with dad.

We got to the trailhead, and indeed I had some sadistic fools come and join me.  Along with my family, we had my sister-in-law and a client from work and her daughter join us.  I sensed there might be  slight problem when they unloaded and got ready a child carrier. Apparently our friends were babysitting and her husband didn't want to watch the kid that morning in lieu of sleeping in so they brought her along.  No problem except that none of us were experienced and conditioned enough to carry an extra 40 pounds up a hill. 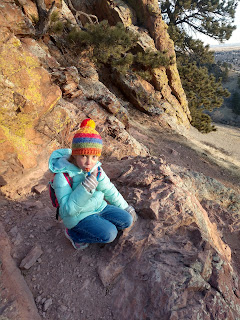 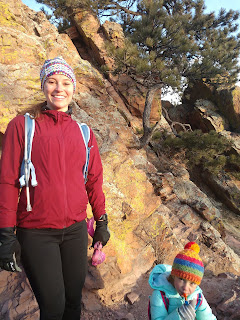 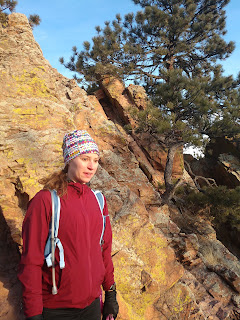 It's alright though.  I'm not in a rush.  One of the things I like about hiking is that you can take your time.  You don't care if people pass you, and you get a cool sense of kinship with other hikers because no matter how different you might be, you've all had the experience of being on the same trail and overcoming it.

We hike over to the beginning of the trail and it hits us right away. Steps.....big steps.  The verticality didn't wait and presented itself like a guardian to the hogback were about to scale.  It became apparent right away that my companions were not expecting this.  I was super grateful that I had taken a hike by myself the previous weekend, because although I'm still fat and out of shape, at least my lungs had got a day of early morning cold air hitting it.  Everyone else was taken aback by this, and rest stops abounded within the first quarter mile.  We arrived at a nice cutout and got our first view of Boulder Valley.  This is the payoff.  It was gorgeous and the sun was shining up there. 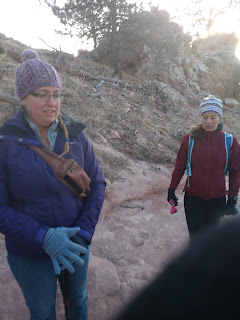 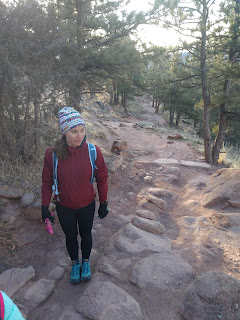 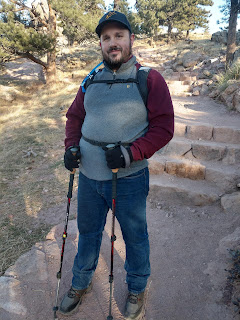 This was when we lost the first members of our intrepid expedition.  The contingent carrying an extra kid decided this was as far as they were going today.. They did a great job and I was really grateful for them coming, and then I felt really guilty about my choice of trail.  I guess I should cut myself some slack in general though. I've never hiked any of these trails so besides an abstract description I'm rolling the dice also.

Okay, we were a few men down, but we went onward.  We were left with me, my wife, my daughter, and my sister-in-law who brought along her little half mountain goat puppy with her.  This dog was bolting up and down rock faces and was having a blast. My SIL has always been the athletic type.  She's the kind of person who mountain bikes, water skis, and all-around is able to do all the cool things a big dude like me wishes I could participate in, but would only end up embarassing or injuring myself doing. 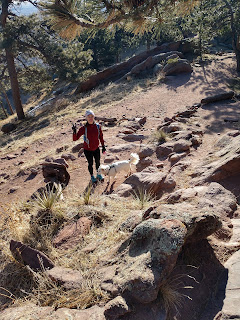 She was one of the people that said she was coming on the next hike when I posted pictures from last week, so probably i picked a little harder one partly to either impress her or not have her be bored and not challenged.  As we started, she indicated that she done this hike before and I was happy to have a "guide" on the trail.

We got about 2/3 of the way up to the summit, when she started slowing down and needing breaks.  This wasn't too characteristic, but I was in no hurry so we hung out in nice flat sunny spots and moved forward when we could.  Oh, did I mention she's pregnant right now? No?  Well, that might be why she was starting to get lightheaded.  I'm not a woman so I cannot pretend to know what it's like, but I remembered while being the support system to my wife, that the little bun in the oven would steal all my wife's energy and food when she would do physically active stuff.

So she decided this was her stopping point for today and her and the puppers ran back down the hill.  I was scaring people away left and right.  Either that, or they really hated my company and took whatever excuse they could come up with.  It's one or the other. 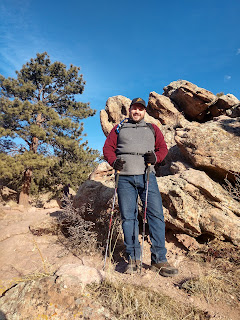 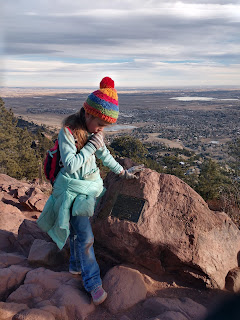 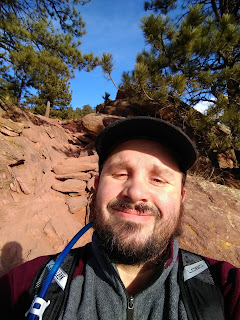 Here's where I want to take a minute to say how proud I was of my 7 year old.  She did such a good job all morning.  My hike went a lot slower than it probably would have by myself, but to see her scaling up this mountain and doing it with almost no complaints was a real treat.

My wife was a rock star as always.  She definitely expressed her pain in the lungs akin to what I had experienced the week before, but none of us were deterred by the exodus of companions.  There was a summit to scale and we were on it.

We arrived at the top and spent a couple minutes eating granola bars before we started down.  The East ridge trail down the face of the mountain was a lot steeper than the back side we climbed up.  It was a fun traverse through many different type of rock and geology.  We even found a cool little cave for my daughter to take a "shortcut" through.  The trail went down to an old Quarry road that had been graded and leveled for hiking and it was all downhill from there, literally. 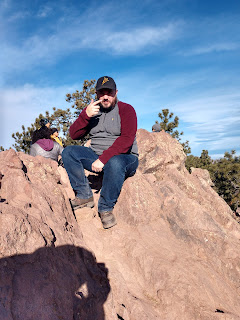 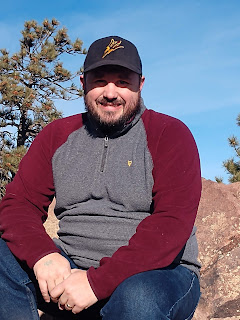 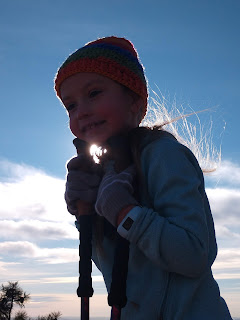 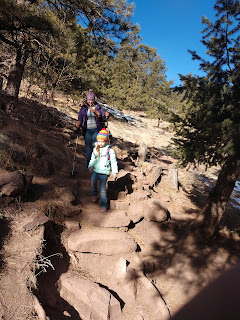 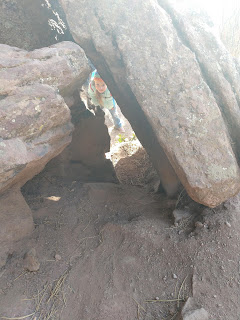 My daughter was getting a little grumpy and tired at this point, but I couldn't really blame her.  When you're in the moment and have a goal of getting to the top it's easy to be excited and focused, but when you get to the point of just walking back to the car, that's when the exhaustion sets in.  We got back to the car, and had a lunch at a salad bar.  It was a great way to recharge. 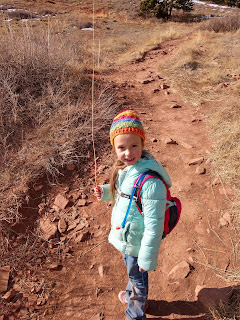 I'll be taking a week off next weekend, as I have a trade show to attend, but I'll be on the lookout for the next challenge.  I hope people continue to join me, but there may be some hikes that I enjoy by myself.
Posted by Brian at 10:44 PM